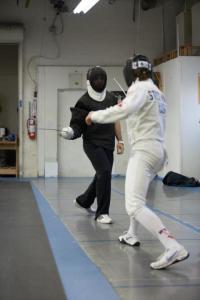 Anyone who takes fencing seriously knows that his/her coach is far more than a figure who shows you the ropes. A good coach will take the role of a surrogate parent, a spiritual advisor, and hopefully, instill a work ethic in his/her students that extends beyond the strip.

I’m going to guess that 90% of the coaches in the United States did not come from the United States. Most immigrated from abroad, hoping to take a niche sport they loved, teach it, and achieve the American dream by starting their own businesses here and watching them grow.

Traveling around the country to many different clubs and fencing camps, I have witnessed many stories of the American dream come true. Here are a few snapshots for you: My current coaches emigrated from Poland (Janusz Shmolenski & Robert Suchorski) and took a tiny club in a junior high rec room and turned it into an empire in Silver Spring that is now regarded as one of the best clubs in the country. A coach I once worked with in Philadelphia fled the former Soviet Union supposedly after shanking a mob boss in a dispute (you can’t make this stuff up).

Day in and day out, Fencers have the privilege of working with coaches who are the embodiment of the American dream of making something out of nothing. Their work ethic is contagious, and for the coaches who came to the States with nothing in their pockets, this is especially true.

Most of my friends who are fencers had the opportunity to go to some top caliber universities, excel there, and many of them now hold great jobs in the financial firms, the consulting firms, the public sector, etc. The one common denominator among them? Working with determined coaches who make perfection (or something close to it) an underlying character trait.

I have always said that fencing is the greatest sport in the world. And it’s not just the game itself that is so great, but the coaches and the people who are a part of it. As we emulate our coaches, we strive to match the diligence and determination that brought them to greatness in the United States, and as a result, you see a very large number of successful people in this sport. Parents who get their kids involved and embedded with a good coach will see their investment pay off in the long run.