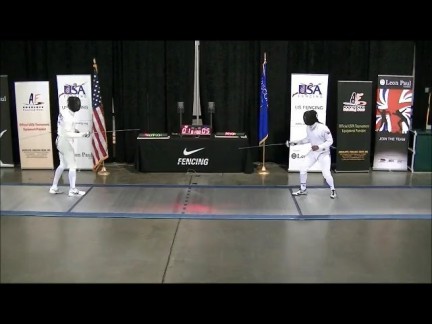 Jason Pryor is a shark on the strip, or as he calls himself, a “maniac.” Watch any bout with Jason, and you will see a man determined to punish his opponents from the time he puts his mask on until the final salute of the bout. Even when sitting on a comfortable lead, Pryor senses the blood in the water and continues his pursuit of victory with ferocity and relentless vigor.

Pryor is the recent winner of the 2012 Division 1 Men’s Epee North American Cup in Milwaukee. Throughout the day, Pryor was practically peerless, winning with decisive victories over Rob Rhea, Alex Tsinis, Daniel Tafoya, Nathan Sorenson, and a 15-2 win over Graham Wicas to make it into the gold medal bout. Other than his bout with St. Louis NAC Gold Medalist Rob Rhea and three time Olympian Soren Thompson, no opponent scored more than 10 touches on Pryor. In the final, he defeated Thompson with a 15-12 victory—a match in which the score doesn’t quite indicate Pryor’s control.

Pryor has been training vigorously at the Olympic Training Center (OTC) in Colorado Springs, Colorado. We sat down with Jason to discuss his goals, his fencing philosophies, and the importance of his family to his success.

Damien Lehfeldt: Who are you coached by?

DL: Many fencers would consider a coach to be like a surrogate family member. How have your coach/coaches affected your life off the strip?

JP: My coach at The Ohio State University, Alexander Smerdin, helped me deal with stress. My sophomore year I remember I was having trouble balancing 20 credit hours of school, fencing, and everything else. Sasha helped me avoid stressing out on stuff I couldn’t control.

DL: You’re still competing well after your NCAA career. What advice can you provide to young fencers to remain motivated and have throughout their careers?

JP: I believe it’s important to remember that fencing is fun. Once you start seriously competing, the fun of fencing can get sucked out. Focusing on national points or the frustration after a year of disappointing tournaments can make anybody angry enough to throw their mask or seriously consider quitting. For me, the best way to overcome all of that is to remember that the reason I started going to tournaments was because it was fun. I’ve considered quitting plenty of times in my career, but for me deep down I know that I love competing and fencing too much to give it up right now. For anyone to fence and compete for 10 or more years you have to be able to hold onto that enthusiasm or else fencing becomes a really stressful hobby.

DL: What initially drew you to fencing and how did you get involved originally?

JP: I used to play soccer in our city’s recreation league when I was a kid in Ohio. Eventually I realized that soccer and team sports weren’t really my thing and I convinced my parents to let me quit. My parents however, told me that I had to choose another sport. I heard about fencing from a classmate, and when I told my parents they took me to Alcazar fencing club that Saturday.

DL: One of the things I most admire about your fencing is that you continue to pursue your opponents with ferocity, even with huge leads. How do you mentally prepare for competitions and how do you maintain your mental intensity even with large leads?

JP: I try to think about the competition as little as possible in the days leading up to it. It’s impossible, but my philosophy is to try and stress as little as possible. I go to movies, eat my favorite food, get a lot of sleep, and joke around. I feel that it’s easier to fence well if you’re in a positive happy state of mind.

To keep the mental intensity during the bout I focus on wanting the touch more than my opponent. On competition day one of the few things you can control is how much of yourself you put into each and every touch. I’ve lost a lot of bouts because I was unfocused, or lazy at the beginning. Now I make sure that I outfight my opponent every single chance I can get.

DL: How would you describe your fencing to someone who has never seen you fence? What are your greatest strengths as a fencer and what areas do you need to work on the most?

JP: I suppose the best way to describe my fencing is…like a maniac. I try to put as much energy as I can to dance in and out of distance. I want to be constantly moving, and then when the opportunity pops up I pounce on it. My greatest strength as a fencer is probably my timing. I get a lot of touches by feeling the moment and then going for the foot touch, or ducking at the last possible moment. My weakness is that attacking is difficult for me. I’m very good at counter-attacking; I’ll apply a lot of pressure to get my opponent to bite at the wrong moment. However, pushing someone down and then creating a moment to finish an attack…I’m not so good at that.

DL: What fencer do you most admire and who do you think you compare favorably to?

JP: I don’t know whom I fence like. As for a fencer that I admire, I would pick Jinsun Jung. That man has an incredible foot touch. I’ve seen him hit everyone with it. I’ve fenced him before and he is inhumanely quick. I want a toe touch like that. 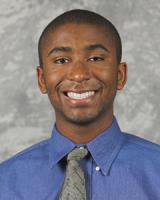 DL: Walk us through what a typical day of training looks like for you in as much detail as possible.

JP: I’ll wake up around 7 am and then lay in bed until around 8 am. Then it’s off to breakfast and then training at 9 am. Our fence runs until 11 am; we do footwork, blade drills, 5 and 15 touch bouts.

I’ll immediately go to the second practice. This is going to either be a lift or conditioning. If it’s a lift, this is going to go about 1 ½ hours. Our lifts can range from Olympic lifts (snatch, clean), presses, squats, lunges, core work, forearm exercises, to pull-ups. If the practice is conditioning then we’ll be doing sprinting cone drills, stair workouts, rowing machine ladders, treadmill ladders. For example, we could go on a treadmill and do 30 seconds sprinting and 30 rest, 1 minute sprinting with 30 seconds rest, all the way to 2 minutes; and then we’ll do that twice.

Finally, twice a week we’ll have a lesson with Benoit. We train 5 days a week.

DL: What are your short term and long term goals in fencing? Are we going to see Jason Pryor competing in Veterans 70 epee?

DL: What are some of your favorite moments in your fencing career and why?

JP: My all-time favorite moment would be winning the NCAA Championship as a team in 2008. I had never been in a situation where so many other people depended on my results. The pressure at NCAA championships is so high. I can remember watching dozens of people mentally crack over the course of the tournament in all three weapons. When our team came together and pulled off the victory, it was unlike any other win I’ve ever had.

DL: How have you incorporated the non-combativity rules into your fencing tactics?

JP: Do I use non-combativity? All the time.  If I’m successful in the beginning of the bout and get a lead my plan is to back off and force my opponent to attack. If my opponent takes too long to set up a successful attack and they call passivity, then awesome for me. This means that he loses time, a coaching break to make an adjustment, and a rest.  Hopefully this gets him into a mindset to rush at me, because he’s afraid that they’ll call passivity again, and my fencing is most successful when my opponent gets in the mindset of “I have to attack”. The best-case scenario is that my lead starts to snowball and they become very sad.

DL: When the USFA posted your fencing bouts from Milwaukee were posted on Facebook, the videos blew up with comments from lots of people with the last name “Pryor” (who I presume were family members). Can you talk about how your family has influenced your fencing career?

JP: My family has been a huge influence on my fencing. My parents, siblings, aunts, uncles, cousins; everyone is really supportive. When I decided to train full time at the Olympic Training Center, many people thought it wasn’t the smartest choice. When I moved to Colorado to train, I also decided to hold off on going to grad school and I stopped applying to a program to teach English in Japan. My family however was 1000% percent behind me. I feel like my fencing career has gone much smoother than it could have because my family is so unconditionally supportive of me.

DL: What advice would you give to parents of new athletes in fencing?

JP: The most important thing is to have fun. The best way to enjoy fencing at any level, whether competitive or recreational, is to make sure you still enjoy it.

DL: What’s the most embarrassing thing on your iPod?

Thanks Jason, congratulations again on your big win in the Milwaukee NAC, and best of luck to you as you prepare for the 2016 Olympic Games.