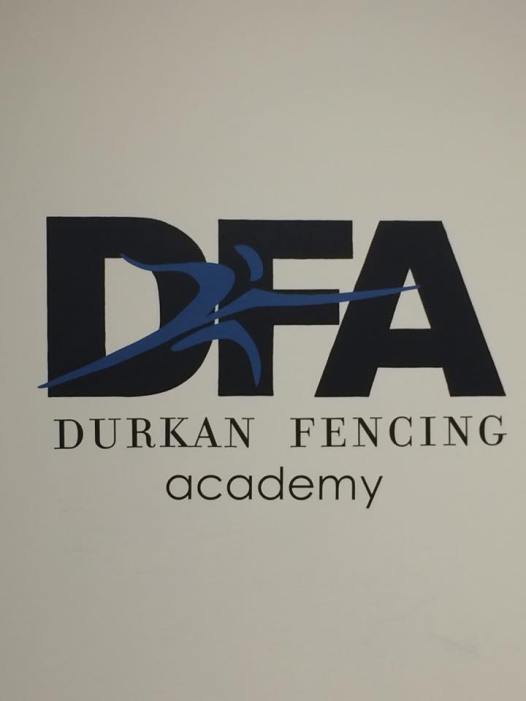 “Here they come to snuff the rooster

You know he ain’t gonna die

A registered nurse, a benefits consultant, a barber, a golf caddy, a psychologist, and a dietitian walk into an abandoned mattress factory and decide to form a massive fencing club with 18 FIE strips. This is the abridged version of the founding of Durkan Fencing Academy (DFA), an ambitious new fencing facility in Hackensack, New Jersey, formed by New York Athletic Club (NYAC) saber coach Patrick Durkan, his wife Amy, and various coaches from the Espada program (Christian Rivera, Phil Brillant, Daniel Bass, and Alex Delaney).

In early 2014, I sat down with Amy and Patrick over a pint and they showed me pictures of a derelict warehouse with eroding walls, leaking water, and dust filled wall-to-wall. The ever bold Durkans told me “we’re going to build the greatest fencing facility in the United States here.” Ten months later, they have quite possibly done just that.

Just before the holidays, the Durkans opened doors to their new facility, which includes:

There’s a unique story behind its founding, the philosophy of the club, and the hodgepodge of personalities that went into the club. I recently interviewed them to hear the story of this impressive facility.

Speaking on the phone with the club’s founders, it becomes clear within moments that they have a joyful camaraderie with one another, formed by years of building the Espada program to international legitimacy, and the sweat equity poured into getting DFA off the ground.

Damien Lehfeldt: When you founded Durkan Fencing Academy, can you talk a little about the thought process and vision that went into the facility?

Patrick Durkan: If you’ve ever been to the Olympic facility in Tauberbischofsheim, Germany, they have everything the athletes need: dormitories, a surgeon and nutritionist on staff, and all the components needed to holistically develop their athletes. Amy and I looked online at hundreds of fencing clubs around the world, and we wanted DFA to model Tauber’s Olympic facility.

Daniel Bass: The first year is about getting the ball rolling and getting the business off the ground. In the short run, we want to get the word out and establish the brand and identity of DFA. Looking down the road, not only do we want DFA to be known locally and regionally, but to also become an international fencing presence, and hopefully continue to expand and open new facilities and grow further.

The ten year program is to become one of the most premier international fencing programs that put us on par with France, Germany, and Italy’s national training programs.

DL: How would you all articulate the philosophy of DFA?

Christian Rivera: We founded Espada on the principles of good fencing, good location, and a happy, healthy environment for our students. Our goal is to also establish a family-like atmosphere at DFA. When we began talking to Patrick about merging our operations, we quickly realized we had the same philosophy: putting the kids first. We stress that academics are #1, and fencing is #2.

Phil Brillant: Fencing is not the end all, be all in life. We believe in teaching our students to navigate life through the lessons they learn in fencing. Our definition of success is not only limited to the student’s accomplishments on the strip, but off the strip as well. Fencing teaches discipline, it teaches you to learn to get back up when you’re down, to overcome adversity, to be a good teammate, and to be a good sportsman. A lunge and a parry 4 work in the fencing gym, but the lessons learned in fencing can be applied to the business world, your family life, and your relationships. We want our students to understand this.

DL: Each of you were elite competitors when still fencing. What was the point for each of you where you decided to transition to coaching?

Christian Rivera: I reached a level where I made my dreams happen. When I got to the top level, I had to pay for everything myself, and the stress mounted. I had a point where I was fencing a critical touch at a World Cup, and I had a fleeting moment where I worried about my future, how I was going to pay for all this and continue, and at that point, I kind of realized that being involved in the sport as an athlete wasn’t going to bring me the same joy as coaching. Amy and Patrick are giving high level athletes the framework to compete and do what they have to do.

Patrick Durkan: I actually began coaching as a sophomore in high school and have loved it since, even when I was still actively competing. I attended one of those quirky, eccentric, egalitarian schools. We all had the same dress code, emphasized treating one another equally. I was given $2,600 and told “go start a fencing team.” We had six kids go to Junior Olympics a few years later. My whole life I’ve been coaching and I’ve always enjoyed it more than fencing.

Dan Bass: The official beginning of coaching was right when I was close to graduating OSU. All of us were on the national championship team there. Prior to that, we had started a fencing business which never really got off the ground. Christian saw the opportunity for us to get things going as coaches in New Jersey, and it’s something Christian and I loved to the point my mom used to joke that she paid for a college major and fencing. I was an English major and wondering what to do for my next step. My writing teachers said to be ambitious and try something big. Becoming a fencing coach was clearly crazy enough and off the wall enough to cover that.
Alex Delaney: I remember in High School saying I never wanted to be a coach. As I progressed, and became more and more into it, my feelings changed and I wanted to be a coach all of a sudden. I was a psych major, and it allowed me to better understand mental thought processes and connect to students. Espada fostered my love of teaching, and I’ve loved seeing kids grow on and off the strip through fencing. We want to give them the tools to succeed in life.

Amy Durkan: As a Michigan fan, it pained me to hire three OSU graduates! I always enjoyed sports and played ice hockey and figure skated throughout HS. It was always something I enjoyed. I loved practicing, traveling to tournaments, and loved the camaraderie I had. I know how important sports are for kids, and loved seeing how well Patrick worked with the kids and athletes. When I got my masters in exercise and physiology, I was able to collaborate with Patrick on the effective training of athletes for all ages from young kids, to seniors. We wanted to look at the fencer holistically, and that’s been a key philosophy of DFA.

DL: Daniel, this came from Bruce Sikes, a reader: “What did you learn from your first coach, Chuck Willis,  that he is now passing on to his new students.”

Daniel Bass: Chuck Willis was an amazing coach. Unfortunately, he passed away a couple of years ago. The biggest thing that Chuck gave me is a love of the game. He taught me that if you don’t love what you do, practice is harder, and success is farther away. It was never about the medals with Chuck, but the personal progress and seeing that day to day progression. He could also make great analogies and stories and weave them into fencing. One of the old stories was his “gopher story,” his way of explaining defense. When I was younger, I used to back up retreat on the strip to get away from my opponents, which is never a good thing. Chuck told me a story of how he tried to catch a gopher in his back yard. When he picked the little guy up, it would growl at him. And that’s how you have to fence, he told me. You have to growl at your opponent, strike fear in him, and be defensive. He would always yell “GOPHER!” at NACs!

DL: You guys have selected Alice in Chains: “The Rooster” as your club’s theme song. Can you talk about that a little?

Christian: I am of Puerto Rican descent, and I found out a really cool family story a few years ago. My grandfather was a famous gallero, or cockfighter. We wanted a mascot that represented the virtues of the rooster: it’s the first animal awake in the morning, it’s a fighter, and when you back it into a corner, it’s ready to go for the kill.

DL: So Durkan Fencing Academy is going to moonlight as an illegal cockfighting ring?

Patrick: We will neither confirm nor deny that.

DL: What advice would you all give to a coach/coaches trying to build a club?

Amy Durkan: I didn’t know much about fencing, but from ice hockey, there were nice rinks, okay rinks, and terrible rinks. I told Patrick that if we were going to do this, it had to be right. We hired a professional designer, we built conference rooms, and we wanted a club that had a professional and clean look and feel to make the club feel welcome for fencers aged five to 85. In Ice Hockey, you always play and practice on an Olympic size rink, so we wanted that same philosophy here, hence the Olympic size strips. When you’re training the nervous system and muscles, you should train with the same friction you feel on the strips at NACs and World Cups. So, my advice is if you’re going to build a club, build it to prepare for the big tournament.

Patrick Durkan: When we came to building DFA, I had ten years of knowing how to run companies. Before you get into a project, you need to understand business, and it’s dangerous to just jump into building a club without that knowledge. Anyone who opens a club should have at least three years of cash burn. Especially in New York, the rate per square foot is insane. Right now, we have 54 members in our club, but fencing can be a fickle sport. Also: find the location that works. We looked at various locations before arriving at this one. It had what we needed: a parking lot, accessibility, good location, and reasonably priced. Lastly, it helps to have a lot of money!