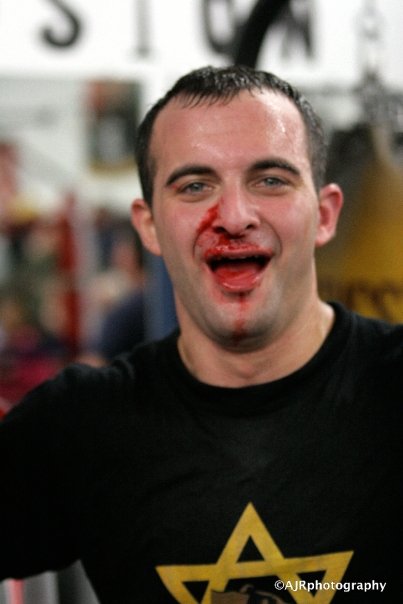 Sometime after I graduated college, I had a quarter-life fencing burnout crisis and decided to take a break from the sport. Boxing, I thought, would be a fun sport to learn. It involves a similar emphasis on footwork, speed, distance control, and strategy, and I loved watching it growing up.

When I got into the ring to fight for my first time, I was reminded of an old Mike Tyson quote: “Everybody has a plan until they get punched in the face.” Each time I dropped my left while bringing back a jab, I was popped in the nose. When I tried to weave under a punch and didn’t get low enough, my head got battered like a drum from a well-delivered left hook. When I stood too square to my opponent, I took a good pummeling to my stomach.

I came out of the ring after that fight with two takeaways: that I sucked at boxing, and that there were consequences for getting hit, including a broken nose and some lost brain cells.

There’s a real danger to competing in sports like boxing, MMA, or any other actual combat sport[1]. Stay in one of these sports long enough, and you expose yourself to heightened risk of CTE or other forms of brain trauma triggered by repeated blows to the head.

“Combat sport” is an amorphously defined term. Most would agree there’s an individual component them. Some would agree that the objective of a combat sport is to disable one’s opponent. And I would add one more criteria: there must be physical consequence inherent to the sport (not as an incidental byproduct of participation).

Fencing, by origin, is a combat sport for obvious reasons. People used swords in war, in dueling, and as a means of self-defense. If you lost a duel, death was a possible result, and getting mauled by a sharp blade was a probable outcome. Earlier literature on sport Fencing instruction, including L’Escrime by J.J. Renaud include sections on wound treatment and care following a duel.

To the benefit of the sport, it has long since moved on from its more violent genesis; in fact, it has a lower injury rate than Badminton and Table Tennis[2]. For those utilizing compliant gear, a contusion from a strong hit is about the worst consequence of partaking in a bout. That’s a tangible upgrade over death or a mortal wound.

The difference between Fencing and combat sports like Boxing or MMA, is that Fencing is a sport for all ages. Fencing’s veteran divisions go up to 70 and above, as it’s a sport you can continue to partake in with continuing benefits to one’s health and wellness, and it’s commonplace to see multiple generations participating together.

The same cannot be said of Boxing or any sport that involves brain smacking. If you know of any AARP eligible citizens partaking in a form of combative pugilism, may God have mercy on their souls and their medulla oblongatas.

Fencing and safety are concepts that go hand in hand. The same cannot be said of combat sports, where the objective can include knocking someone unconscious, choking them out, or bending their appendages to force them to submit. Fencing is a community-oriented sport for all ages. The brutality associated with its history is long behind us. I left boxing behind in my twenties. I look forward to continuing to SAFELY compete in my thirties, forties, fifties, sixties, seventies, eighties, nineties, and into my 100’s when Jeff Bezos and Elon Musk figure out how to turn us into mechanized cyborgs.